The CSAC – Study Center and Communication Archive of the University of Parma has reopened the renovated and restored spaces of the Abbey of Valserena with Through time: integrity and transformation of the artwork, a program of exhibitions and artist-in residence created on the occasion of Parma – Italian Capital of Culture 2020.

The artists were invited to reflect on the heritage conserved at CSAC by proposing their own interpretation, a collection of archives gave them an opportunity to discuss and interact with each other, therefore to create installations that will be visited during 2020, accompanied by an editorial project: three volumes published by the All Around Art publishing house. 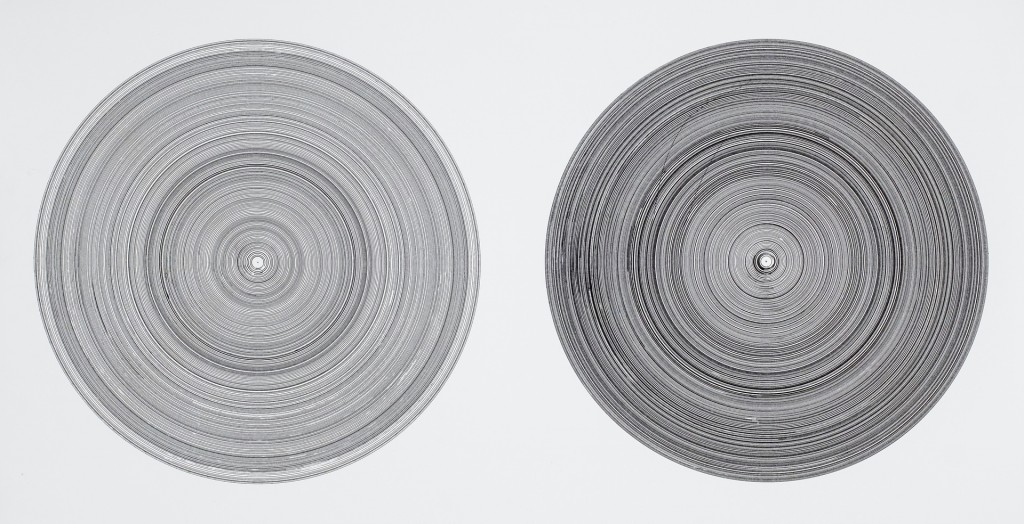 Originally Massimo Bartolini’s artworks are created thinking about the specific context and are closely related to their environment.  The artist intervenes on space in a completely antimonumental way, modifying, interpreting and defining it.
During his residency at CSAC Bartolini was invited to discuss the archives and volumes of the abbey church of Valserena, and he chose to work by interpreting the individual elements of the collections by bringing them together, to get to something different and unpublished.
Massimo Bartolini with On Identikit is focused on the works of two great masters such as Luigi Ghirri and Luciano Fabro, presented in the CSAC collections.
In the preliminary stage of the project, the artist searched for all the vinyl records photographed by Ghirri in the Identikit series (1976-79), where the Emilian artist truthfully and implacably restored a portrait of himself through another one from his own library.
The titles of the vinyls present in the photos, often eroded from the use and almost illegible on the side, provoked in Bartolini an “archaeologist curiosity”, which led him to parade the 33 spins from the library of the Luigi Ghirri Archive and listen to them in a very specific place and in the company of someone.
This someone is Lo Spirato by Luciano Fabro (1968-73), a work that Fabro has been working on from 1968 until 1973, making the cast of his body on a pallet, as documented by some photos of Johnny Ricci, therefore a plaster, and then to launch a subscription campaign for the modeling of marble sculpture in 1973. The cast of Lo Spirato, donated to CSAC after the exhibition Della falsità (1974) is now placed in one of the noble chapels of the Church of the Abbey of Valserena, creating a scene that for Bartolini is “halfway between an unmade bed and a fold- out one” where the body is both present and invisible.
With the work On Identikit, Bartolini intends to bring together the invisible and present being of the Spirato with the being, invisible for nature, with the being of music, which resonates in the enchanting areas of the Church.
As the artist states himself, “I would like to make that sculpture listen to the music, perhaps to console itself, like when you bring a bouquet of flowers to a grave, or to cheer him up, like when you want to move an energy, or to make a spell to make organic an inorganic”.
In this context, the viewer is invited to the participation, which mainly consists in questioning their gaze and presence within the museum, with respect to the both: to the architectural volumes and towards those two works. 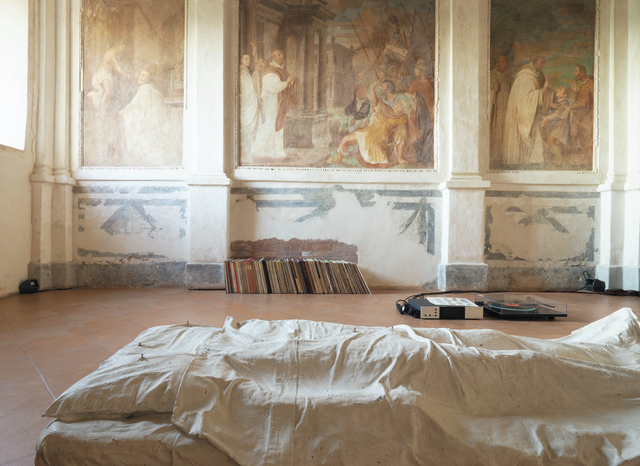 Discover On Identikit through images

Look at the installation view of the project 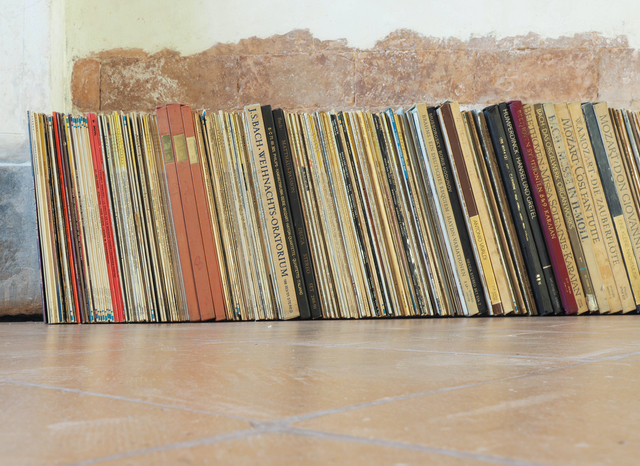 Listen to the playlist of Massimo Bartolini

A musical selection created by the artist 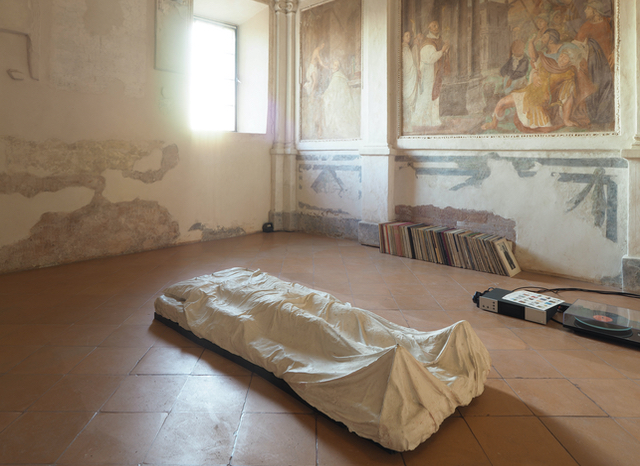 The images from the exhibition

The backstage of the exhibition 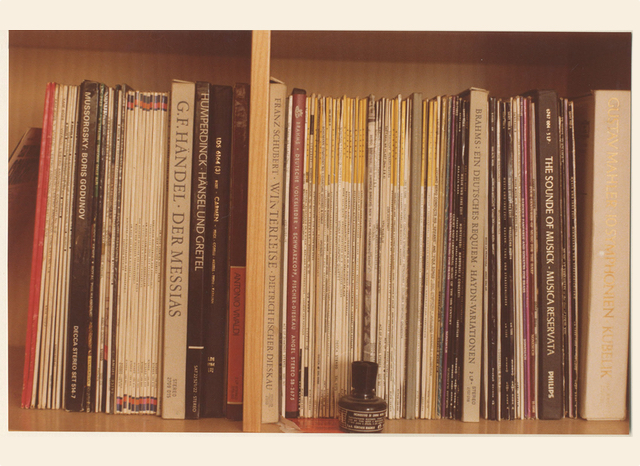 CSAC curator tells about the work of Luigi Ghirri 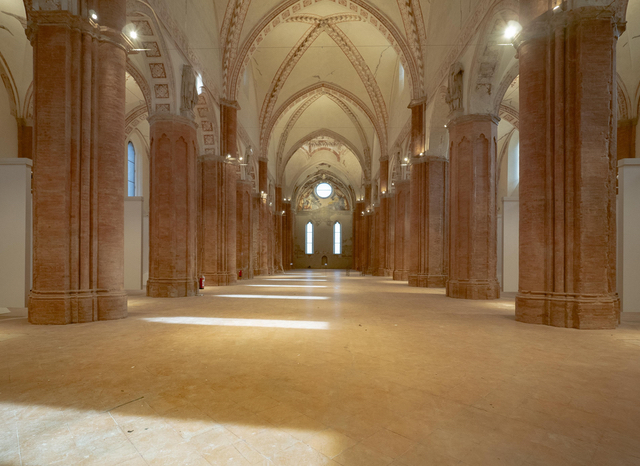 A selection from who lent his vinyls to the exhibition 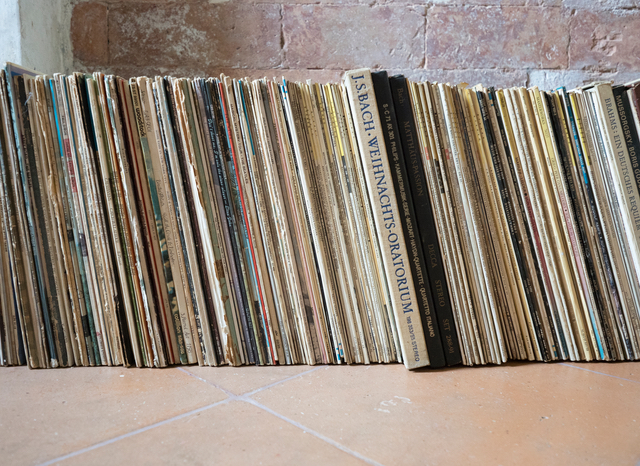 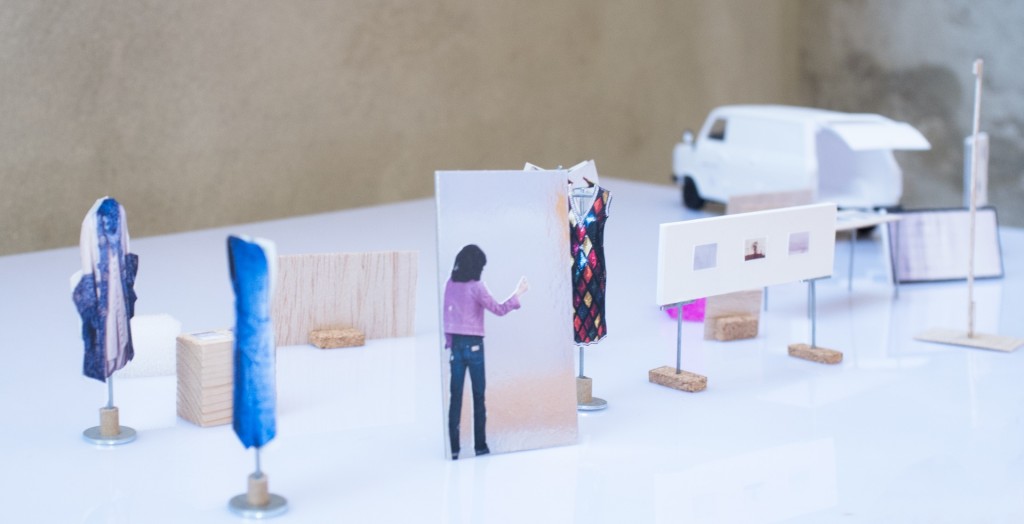 Luca Vitone is an artist who has always worked on the idea of place, cultural production and memory. As part of Through time, he offers Il Canone, a tribute to the concept of the archive itself by showing the van that has being used until the beginning of the 2000s by CSAC for the transportation of the artworks. This mean of transport – metaphor of the action of taking and acting for the collection and construction of the archive – will be set up in the imposing central nave of the Abbey Church, followed by a long “parade” of works and projects that represent a wide spectrum of Italian artistic and cultural research of the twentieth century, selected by the artist with a completely personal criterion, almost to reconstruct imaginary links between the works preserved at CSAC and their own biographical events.

For the artist, “entering the CSAC archive is like diving into a tropical sea, one of those known for snorkeling. Impossible not to be fascinated by it, even if you don’t recognize the fishes, you are dazed by the colors, the shapes and especially by the quantity of animals to be observed. […] But there was one thing that always came to my mind: a white van, parked in the far corner of the square, as if it was abandoned, stayed there with its writing on the door ‘Università di Parma’ to testify to its past role”.

According to Vitone, the van conceptually refers to Joseph Beuys’ 1969 Das Rudel work, in which twenty wooden sleds emerge from an old Volkswagen van. As for Beuys, also in the case of Vitone, the 24 works and objects that the van of the University of Parma leaves behind, are connected to some autobiographical episodes of the artist or to the authors who have profoundly marked his artistic growth, rediscovered inside the CSAC archives. These include: Ugo Mulas, Alighiero Boetti, Gianni Colombo, Lucio Fontana, Mario Schifano, Mario Nigro, Pietro Consagra, Alberto Rosselli, Afro Basaldella, Luigi Ghirri, Erberto Carboni, Archizoom Associati / Lucia Bartolini, Walter Albini, Giosetta Fioroni, Michelangelo Pistoletto , Maddalena Dimt, Franco Albini, Danilo Donati / Sartoria Farani, Ettore Sottsass jr./Sottsass Associati, Andrea Branzi, the satirical magazine “Il Male” and even an anonymous author of an imitation of a lamp by Vico Magistretti.

A monochrome created by Vitone himself with CSAC powders will also be set up in the apse of the Church, made on the occasion of the residence and donated to the center. 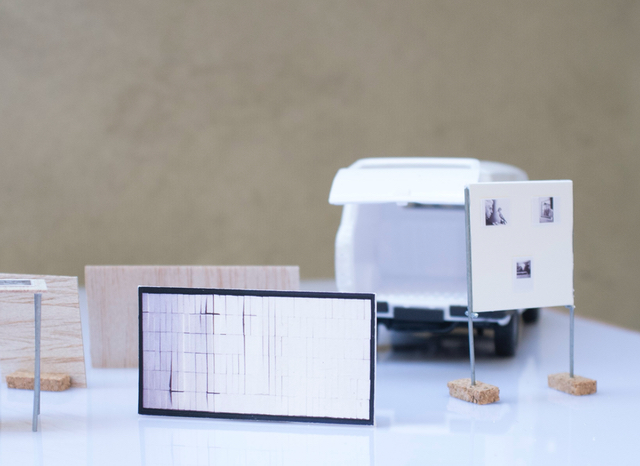 Look at the photos of the installation model 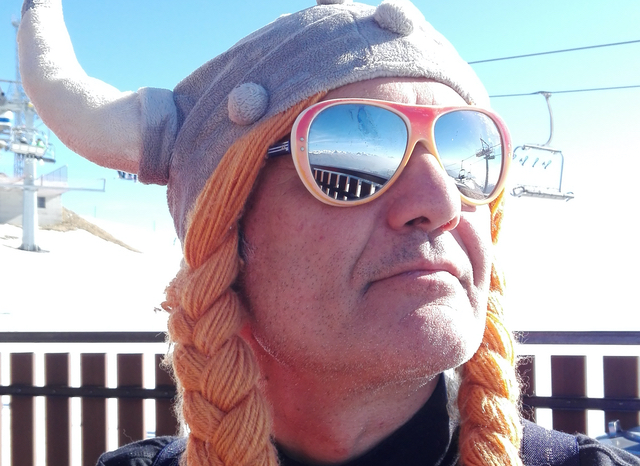 A musical selection created by the artist

Luca Vitone talks about the project

Il Canone in the words of the artist 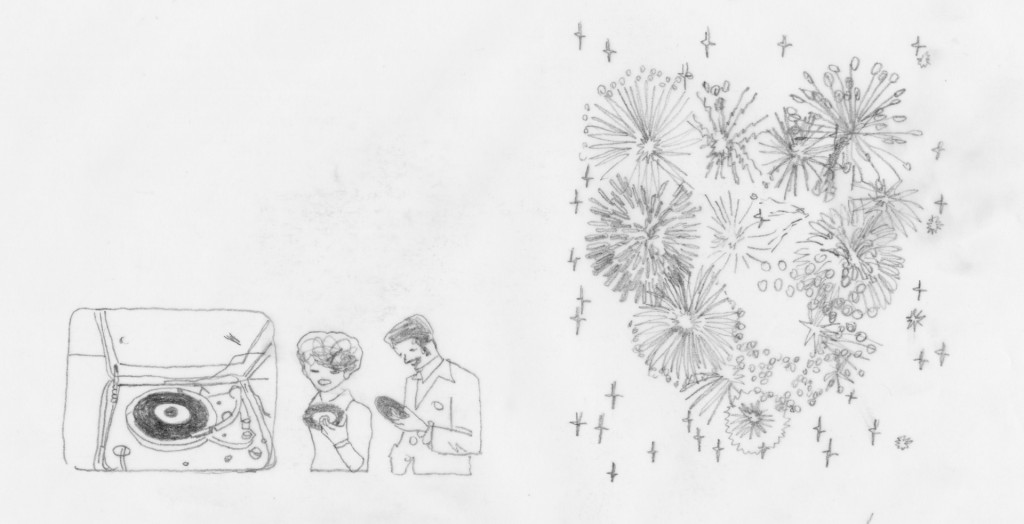 The final chapter of Through time will feature Eva Marisaldi, an artist who has already worked on CSAC archives in 2017 as part of the L’Abbazia per tutti project, financed by MIUR, when she created, with the collaboration of Enrico Serotti, the Jukebox audio-video work aimed at the handicapped and non-handicapped public, with a view to an inclusive approach to the Archive-Museum.

Eva Marisaldi expresses herself through a versatile artistic language mediated between photographs, artifacts, actions, videos, animations, installations, alternating with embroidery and drawing techniques. Also her works are characterized by a refined narrative vein. In her research, she takes inspiration from reality but focuses on the hidden aspects of everyday situations, analyzing them through her way of making art, a playful process that enters the sphere of fantasy and imagination.
Questioning herself on issues, such as dialogue and communication, Eva Marisaldi investigates the possibilities for individual and collective reflection within the exhibition space, dealing with it in an always delicate and elegant way.
Her works consequently do not produce an immediate impact, her interventions are complex and are characterized by an initial sense of disorientation, requiring long pauses for reflection and careful observation.